“Choosing to challenge should go above and beneath where we think we are holding these conversations." 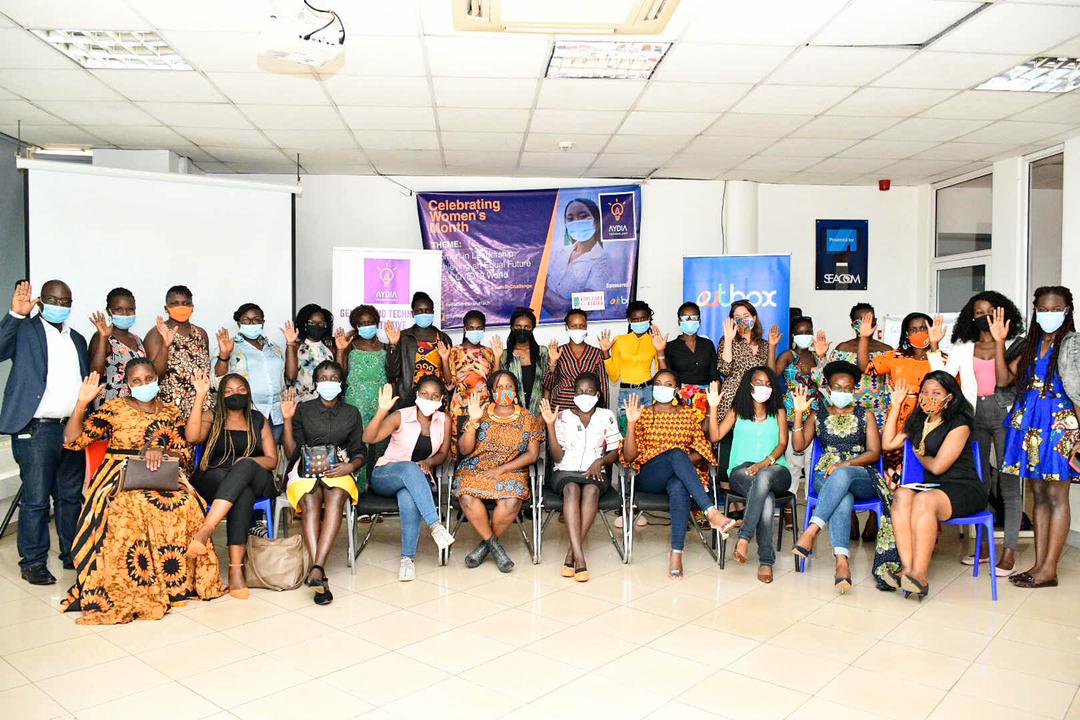 “It is equally important to articulate one’s feminism for it is not something dangerous or revolutionary. Feminism is something that we should declare to the world,” said Carly Van Orman, Cultural Affairs Officer at the US Embassy in Uganda.

She was delivering a Keynote address at the Women’s Day event, which happened at the Outbox offices in Kampala, funded by Akina Mama wa Afrika, a feminist-Pan-African leadership development organization, Strengthening African women's individual and collective leadership capacities and forming strategic partnerships to tackle patriarchy and attain gender equality.

One of the first questions Carly asks men is if they are feminists.

Talks by the two panels were centered around; Why women should join tech, advancing gender equality, women in leadership, and highlighting women’s rights physically and digitally.

Speaking on feminism, Joseph Nyende noted that one of the things that radical feminists have failed to understand is that men can change.

Nyende, working with the Foundation For Male Engagement Uganda (FOME), admitted that some of the obstacles women are facing have been caused by men and that the men never realize that they are causing these obstacles.

He begged that men be informed of the obstacles they are inflicting on women.

“Opportunities that men get should be the same opportunities that women have access to,” said Sylvia Kakyo, Co-founder of Schools Uganda, and Global Youth Ambassador- Their World, who advocates for women to have the same resources as men, and a law that protects both genders.

“We should slow down and challenge toxic workplaces,” said Carly, who adding that individuals and organizations should have structures in place. Still, about workplaces, Carly noted that when looking at promoting employees, certain criteria should be followed, instead of having the normal and being subjective.

Kakyo challenged the audience to scrutinize the numbers of women in leadership compared to males, where she called for institutional frameworks. 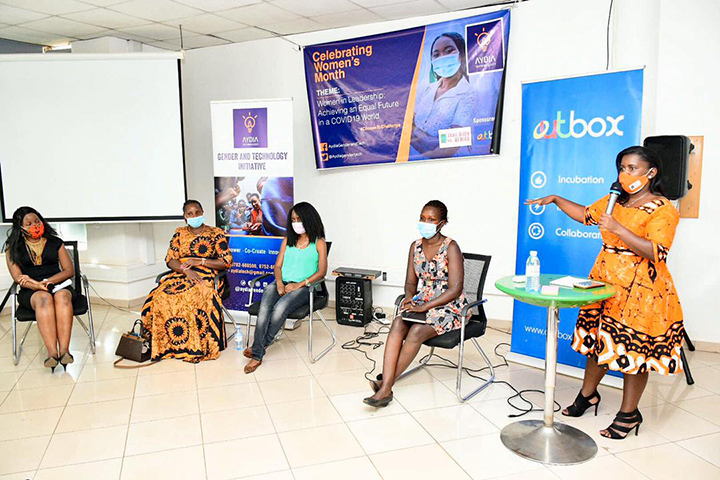 Also, the only male on the panel at the event, Nyende, championed a strike in balance by having male engagement in talks involving women, most of which are held during the women’s month.

Seeing this year’s theme as “the best” there has ever been, Nyende described it as one that didn't discriminate between women and men, something he said has been challenged.

FOME chooses to challenge patriarchal thinking, challenging the progress of women in terms of leadership and empowerment among others.

Imploring women to "choose to challenge" whatever they think is bad, Nyende acknowledged that; “Most of the violence seen in Uganda is perpetrated by men and boys. These are the same people engaging in conversations to protect women,” he noted.

He wondered if men continue with the same advocacy that they have with their peers, after sitting on round tables to discuss as panelists.

Nyende mentioned that FOME has talked to men to be different. “The men who have had an opportunity to be talked to in terms of supporting their spouses and women elsewhere behave better,” he ascertains.

As the FOME, sensitization is being carried out for men to understand accountability, and that they should work towards advancing women economically and also in terms of leadership,

Tendo Namata, the founder of Embibo Gender-Based, with beliefs in creating gender-responsive and economically empowered women and rural communities, chose to challenge herself by reading about African Justice which is focused on the survivor, who is the woman.

According to Tendo, only 5% of Ugandans can get justice from the law.

“The many times we think about the justice of people who have been raped is to first go to the police, but there is rarely evidence of what happened,” she said.

“How can we give healing to people who fail to get justice?” wonders Tendo.

The founder of Embibo Gender-Based ponders on how society can change office environments to make sure people always go to work and feel like they want to work with their employers. She challenged society to define the culture and environment at workplaces. “The people I work with and for, what do they want to choose to challenge?” she wondered.

“Unfortunately, we have to drag women into tech by their teeth,” said Angela Mirembe Semwogerere, Founder Coding in Heels.

Tendo had never thought of tech as a way to help rural areas, much as she knew it was an important aspect.

At the beginning of 2021, she noticed that the students in villages are not able to access education in any form while their counterparts in Kampala are using technology, something that needs to be divulged.

“When we talk about choosing to challenge, I challenge people to challenge,” said Carly, urging people to say something when they see something wrong. This might be someone being harassed. She emphasized the importance of speaking out and airing such issues.

“Women have the opportunity to influence, and we should exercise these powers,” Carly said.

With many opportunities at the US Embassy in Uganda, the US has demonstrated success in solving a lot of challenges being faced by women.

During the COVID-19 pandemic, Mirembe has carried on life smoothly in terms of tech.

“You can't be a failure because you don't have school fees,” she said. She noted that sadly, many women were not able to keep their jobs while others found themselves stranded because they didn't take up tech.

“It’s going to get worse for people being ignorant about tech, while it gets better for tech survey people,” Mirembe warns.

On utilizing tech, despite not having a degree in the field, Mirembe concentrated on taking up IT courses and getting certified in different courses that were offered on Google.

According to Mirembe, all fields are expected to be so different years from today. No matter the sector you're in right now, you have to leverage tech because it opens space for us. If anyone feels like they’re getting left behind right now, the train is going to move faster in 5 years to come,” she warned.

Patricia Humura, Period Equality Advocate, cheered on the ladies not to forget to recognize their efforts in everything. 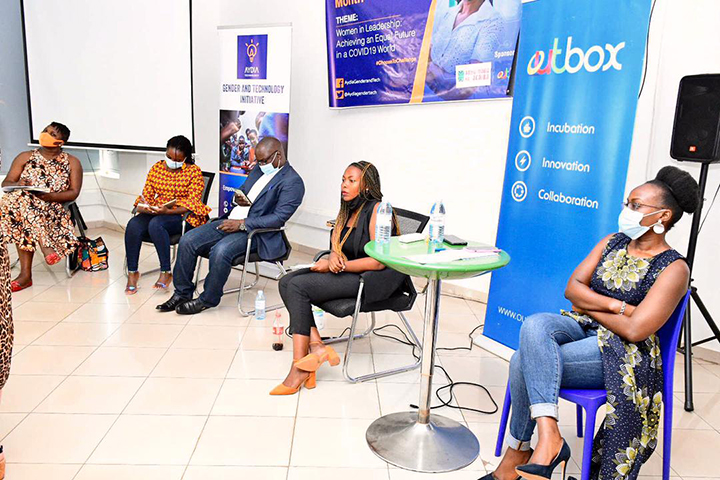 “We should celebrate and challenge all the negative energy surrounding us,” she said. The Human Rights Advocate said their programs have been restructured to fit in the COVID-19 pandemic where they have had to provide families with food and soap in Soroti and Jinja. More to this, they have had to embrace technology.

Unlike the period before the pandemic, the women under their watch in Jinja and Soroti have been empowered with using Whatsapp to communicate.

Period Equality Advocate has got a critical mass of young women to dismantle systems challenging equality.

Challenges women face beyond COVID-19 and the solutions

The COVID-19 pandemic saw the sinking of so many businesses, but Sandra Ejang Elobu, CEO, Western Silk Road, has used the pandemic to fetch solutions for growing her business.

The pandemic saw her grow a struggling business from a kafunda (small shop) to owning a bigger one in one of the most commercial places in Kampala, around Acacia mall.

The COVID-19 virus brought to the realization of many healthy living options where people had to do away with sugar, substituting it for honey, which she is selling, thanks to her beekeeping. 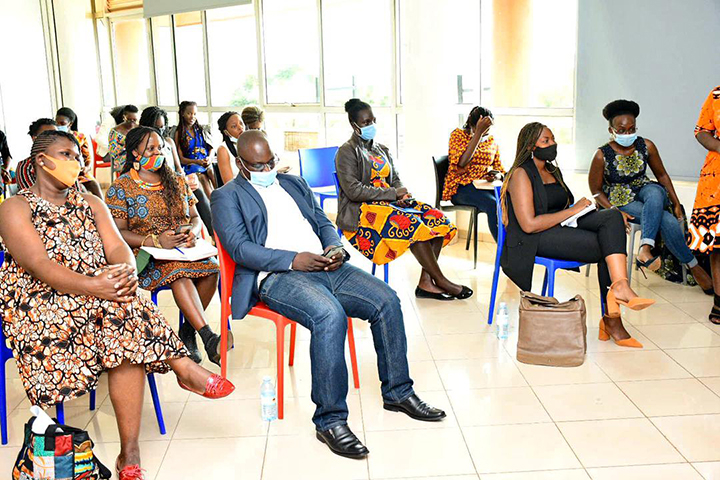 “Because of COVID-19, people had to leave their comfort zones, not because of education, but for survival,” said Elobu.

“If you know someone who can help you grow, you need to ask and reach out to the many leaders who are willing to help,” she said, advising women to network as much as they can and to include gentlemen as the learnings are carried out.

“We must be brave and bold to solve challenges of women in leadership,” said Rose Mary Nakame, a Public Health Expert, and ED Remi East Africa.

Mirembe echoed that a woman’s network is their net worth, reminding many that people are all gifted and talented.

“Covid might have been the worst thing to happen, but it is a time we had to change to realization,” she said, adding that God didn’t make a mistake; “Someone needs your gift- we connect to the people who need our gifts, which is where networking comes in.”

Mirembe beseeched women not to die with their gifts given that there is so much information on how we can improve ourselves and look at the leadership and gifts of fellow women to aim higher.

Scientific campaigns and elections which were very challenging to women, according to Honest Kansiime, brought to the realization that tech is a field that all women in leadership positions should step into. 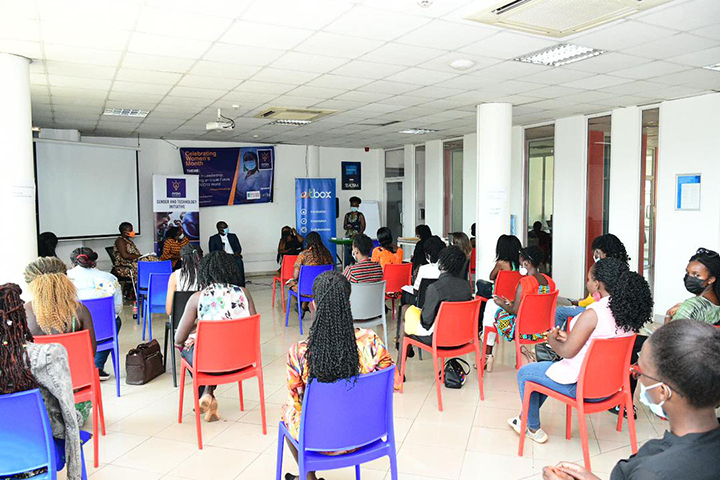 “We had to campaign scientifically, something that puzzled us into wondering how we would succeed at it,” said Kansiime, who said it was a tough season for politicians because there were no gatherings allowed.

The timing was a wake-up call for women to join tech in due season.

Kansiime advised women not to be ‘starving bakers’, justifying that women are always at the center of everything, thereby forgetting themselves.

Rose Mary Nakame, a Public Health Expert, and ED Remi East Africa, noted that it is important to know what women do to present in leadership. The women who present from the kinds of environments are coming from a mostly patriarchal society.

“We need to recognize the different changing roles of women as they increase in age. Who is there to provide that information and where are the support structures?” wondered Nakame.

“Choosing to challenge should go above and beneath where we think we are holding these conversations. As we kept doing this work to increase access to Health Care, we realized in 2018 that we needed to create more sustainable structures,” noted the Public Health Expert, who through the COVID-19 pandemic noticed that it will take much more than women needing digital skills to have more structures.

INNOVATIVE TRENDS TO LOOK OUT FOR IN 2022

The Role Intermediaries Play In Creating an Enabling Environment for Innovation